Doin’ My Drugs Premieres in Switzerland for “Zero Discrimination Day” 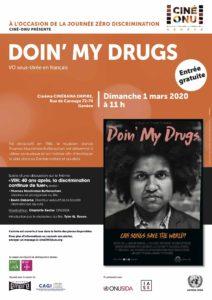 Swiss Premiere of Doin’ My Drugs in Geneva followed by a discussion: HIV: 40 years Later, Discrimination Still Kills, with Film subject, recording artist and AIDS activist Thomas Muchimba Buttenschøn; Doin’ My Drugs Documentary director Tyler Q Rosen; Executive Director of the International AIDS Society, Kevin Osborne and Charlotte Sector, the Multimedia Communications Manager of the United Nations (ONU) UNAIDS.
Doin’ My Drugs is the story of musician Thomas Muchimba Buttenschøn—born HIV-positive in 1985—and his crusade to use his music to wipe out AIDS in his native Zambia and beyond. Doin’ My Drugs aims to raise awareness about the ongoing HIV/AIDS epidemic in Zambia—a country of 17 million people where more than 1.2 million are HIV-positive or have the disease. Zambia’s situation is mirrored throughout the developing world.
A father to two young children, Buttenschøn has kept his HIV in check and his family virus-free, by “doin’ his drugs.” He recognized that his native Zambia remains trapped in a horrific and senseless AIDS crisis. While a significant percentage of the population there is infected with HIV, many antiretroviral drug treatment programs that keep the virus dormant—“a near-zero viral load” as Buttenschøn says—are widely available through government programs for free.

“DOIN’ MY DRUGS” SCREENING WITH STAR AND DIRECTOR

THINGS TO DO THIS MARCH 2020 WITH THE FAMILY