by Linda Tomlinson
in
0 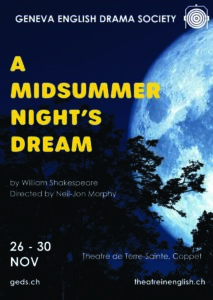 “The course of true love never did run smooth….”

Never have these words been truer than in William Shakespeare’s A Midsummer Night’s Dream where they first appeared.

Shakespeare’s most popular play and a consistent favourite of audiences worldwide, A Midsummer Night’s Dream gives us a whimsical and hilarious mix of love and magic in the forests around Athens centred around the preparations for the wedding of Theseus, the Duke of Athens, to his fiancée Hippolyta, the former queen of the Amazons.

In a gleeful weave of magic spells and playful subterfuge on the part of Puck the mischievous sprite, attractions and infatuations are created and reversed among humans and fairies alike in an intriguing cauldron of enchantment all at the behest of Oberon, the king of the fairies who himself is engaged in his own battle of wits with Titania, the imperious fairy queen.

Come join us in the forests of Athens for this heady mix of comedy, romance and drama, as humans and fairy folk get in and out of trouble.

Opening night patrons are cordially invited to join the cast and crew for a glass of bubbly after the show courtesy of
Blackden Financial.
ADVERTISEMENT
Previous Post

REDISCOVER THE MAGIC OF CHRISTMAS IN CAROUGE