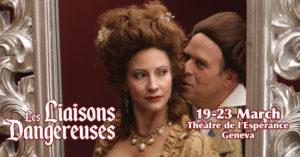 The latest performance by Geneva English Drama Society (GEDS) will take place from 19-23 March and this time they will be performing Les Liaisons Dangereuses, written by Christopher Hampton, based on the iconic 1782 French novel by Pierre Choderlos de Laclos.

The production is in English. The Hampton script of this story of power and manipulation using sex as a weapon has been done many times to great acclaim notably in the 1988 film, Dangerous Liaisons, with Glenn Close and John Malkovich as well as on stage, memorably by the Royal Shakespeare Company in 1985 (Alan Rickman, Lindsay Duncan)and a 2016 production of the Donmar Warehouse (Janet McTeer, Dominic West).

An incendiary tale of vanity, seduction and manipulation

The imperious Marquise de Merteuil and the womanising Vicomte de Valmont are intimate friends and former lovers who form an unholy alliance, using sex as bloodsport and setting out to ruin the lives of others either for sport or revenge. Clever and over-confident, the merciless pair set in motion a series of deceptions which explode with shocking results.   Set amongst the French aristocracy in the late 18th century, just before the French Revolution, it was one of the most scandalous and controversial novels of European literature of the time.