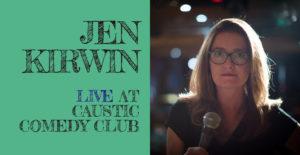 Jen Kirwin is an American stand-up comic living abroad. She’s performed all over the US and Europe.
Some credits include NBC’s Last Comic Standing, Montreal’s Just for Laughs festival, Caroline’s on Broadway. Jen recently opened for Wanda Sykes on her European tour.

Jen’s hour show “Pardon my French” touches on life as an expat, motherhood, marriage and politics.