PIECE FOR PERSON AND GHETTO BLASTER 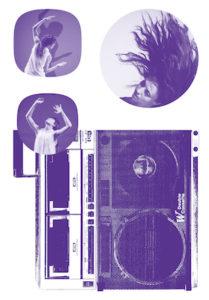 “Piece for Person and Ghetto Blaster is a confrontational muse on peace and conflict, moral relativism and the very function of art. The story came from something that actually happened. I saw a man throwing stones at a sitting duck and I yelled at him. I use the piece to dissect the excruciating realms of human behavior and attempt to navigate of the moral and ethical complexities of intervention. Littered with anecdotes and digressions, critical and philosophical theory, the text is accompanied by a rhythmic electronic soundscape, and a non-stop, athletic choreography that is made to shift from the unnecessary and incongruous to the comic and strangely affecting.

It came about through several years collaborating with Melbourne-based choreographer Jo Lloyd. Together we developed a talking and dancing practice we called ‘Therapy Conversation-Conversation Therapy’ and made a series of performances and site-specific and durational works in gallery spaces. We were interested in the liminal space created through talking and doing and creating small performative moments in galleries with an unknowing collaborator – anyone who showed up and was willing to participate in the experiment of putting action to thought and words, or “seeing the thinking.”

I wanted to adapt this process to the story with duck because what preoccupied me about this situation was how I reacted – how I amplified the violence of the situation through my words, thought and action. I began thinking about unnecessary action and this led me to the choreographic impulse for the work. I think of the text as circular thinking and there is rhythm and choreography to how it is structured. Jo and I wanted to find ways to subvert and compliment this with movement, so the intention was to have two layers in perpetual motion, sliding over each other.”
Nicola Gunn