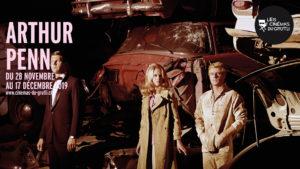 Arthur Penn is one of the precursors of the New Hollywood, the impetus given to American cinema in the late 1960s by a handful of daring directors who loved creative freedom. Known for his great box office success with Bonnie and Clyde, Penn is also the author of many masterpieces, such as Little Big Man. A funny Voltairian tale, this film showed that, in the Wild West, civilization was not on the side of Col. Custer but rather of the Cheyenne… And what about the little-known Four Friends, who evokes, through allusions, the assassination of President Kennedy, racial segregation, the Vietnam War and thus questions the “American dream”? or the Chase, a tragic portrait of an America in the grip of its demons, with Jane Fonda, Marlon Brando and Robert Redford? All these films are to be discovered at the Cinemas du Grütli from 27 November to 17 December.

To accompany this retrospective, we welcome, on December 13 and 14, director Jonathan Nossiter (Sunday Signs and Wonders and obviously Mondovino), Arthur Penn’s admirer. He will tell us about his friendship with Penn (who passed away in 2010), present a handful of his films and show Searching for Arthur, an interview he shot in Manhattan with him.